American Street is an evocative and powerful coming-of-age story perfect for fans of Everything, Everything; Bone Gap; and All American Boys.

In this stunning debut novel, Pushcart-nominated author Ibi Zoboi draws on her own experience as a young Haitian immigrant, infusing this lyrical exploration of America with magical realism and vodou culture.

But after they leave Port-au-Prince, Haiti, Fabiola’s mother is detained by U.S. immigration, leaving Fabiola to navigate her loud American cousins, Chantal, Donna, and Princess; the grittiness of Detroit’s west side; a new school; and a surprising romance, all on her own.

Just as she finds her footing in this strange new world, a dangerous proposition presents itself, and Fabiola soon realizes that freedom comes at a cost. Trapped at the crossroads of an impossible choice, will she pay the price for the American dream?

Fabiola is a Haitian teenager who lived most of her life in Haiti together with her mother. When the two of them are attempting to return to the United States to secure a better life, Her mother is being detained by US immigration. Throughout the story we learn of the reason why that happened.he goes to  live with her aunt Jo and three cousins in Detroit. While trying to adjust to the new country, she constantly misses her mother and tries her best to have her released, so that the two of them can have a better future. Her family, have own problems and make questionable and not always the right choices in life.

The theme of this story is based on the main character trying to make sense of what happened to her mom and then trying to find a way for her mother to join her. As she begins to settle into her new environment, she meets and falls in love with a young guy named Kasim. Kasim will teach her about her new world and also serve to temporarily fill the void that she only desires for her mother.

So many events occur that keep the storyline interesting and moving.

This book really shows harsh reality.  The intertwined stories of each character that you get every so often, it makes you really sad how many people can be victimized,coerced,  and manipulated. They have deep struggles. This was intense, grand, and realistic! Such a great job of writing that draws the reader into the tension and makes it easy to empathize with Fabiola. American Street is a great YA book and I strongly recommend it 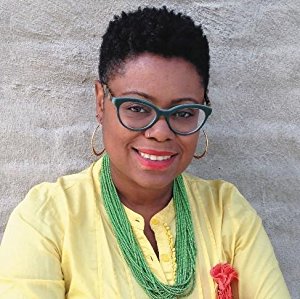 .Ibi Zoboi was born in Port-au-Prince, Haiti and immigrated to the U.S. when she was four years old. She holds an MFA in Writing for Children & Young Adults from Vermont College of Fine Arts, where she was a recipient of Norma Fox Mazer Award. She lives in Brooklyn with her husband and three children. American Street is her first novel.

Follow Queenie's BookTalk and Reviews on WordPress.com
Join 76 other followers