Please welcome to my blog today Author Trevy A. McDonald.

Can you tell us a little bit about yourself?

I’m a woman from the south side of Chicago who dreams big and believes that her dreams are attainable with immediacy and ease.  I’ve learned that when you commit to your dreams, your desired resources are provided. That has been my testimony and journey. I’m a Chicago Public School graduate, and earned a B.A. in Radio/TV/Film from the University of Wisconsin-Oshkosh. I also earned a M.A. in Radio, Television, and Motion Pictures and a Ph.D. in Mass Communication Research, both from the University of North Carolina at Chapel Hill.
What do you do when you are not writing?

I enjoy gardening, painting, photography, and film. I often find myself researching topics related to Diversity and Communication for one of the courses I teach.  I’ve also kept a daily gratitude journal since June 2006.  Each morning I write down 10 things that I’m thankful for (even if they haven’t happened yet), and ten intentions for the day.

Do you have a day job as well?

When I think back, I started writing as a child in the form of letters. My Aunt Valerie sent me a dress for no special occasion. My Mom taught me to express my gratitude, and I did so in the form of a Thank You note to my Aunt Valerie. She wrote me back, and I began writing letters to her. I credit her for my love for writing. My latest novel, Round ‘Bout Midnight is dedicated to her.

I wrote and illustrated my very first book in sixth grade for a homework assignment. It was titled “Drama” and was about how successful one could become from acting. My teacher, Mrs. Talaganis, entered it in Illinois Young Writers, and it was awarded. Gwendolyn Brooks was the keynote speaker that year, and she autographed my book.

In 1995 I found myself armed with a Ph.D. at age 25 and unemployed. I asked myself a valuable question. “Trevy, what can you do right now to make yourself more marketable?” During that time three book projects were born. The first two were scholarly anthologies—Nature of a Sistuh: Black Women’s Lived Experiences in Contemporary Culture and Building Diverse Communities:  Applications of Communication Research. During that time, my ten-year high school reunion was approaching, and I wondered what my life might have been like had I maintained close contact with my high school friends. During a Southern snowstorm in January 1996, the characters Thomasine, Rachel, and Hope were born. I completed writing the first draft of the novel on July 24, 1997, just weeks before my own ten-year reunion. After a year and a half, I got the courage to begin the self-publishing process for my first novel, Time Will Tell.

How did you choose the genre you write in?

I write women’s fiction. It has been described as chick lit with a literary flair. I wanted to present different images of Black women than we typically see in popular culture. Just before I wrote the bulk of Round ‘Bout Midnight I had three Black male students who had a huge impact on me. I decided to feature my male characters more prominently in Round ‘Bout Midnight to present a different image of Black men than we typically see in popular culture.

Where do you get your ideas?

When I wrote Time Will Tell I knew that the story would start chronologically during the senior year of high school and end at the ten-year reunion. I had to fill in the blanks. Strangely at the time, I felt that I was getting old and wanted to hold on to the nostalgia of my youth. To help develop the characters and plot, I used Robert Ray’s book The Weekend Novelist. One of the exercises was “What ifs?”  What if this happened to the character, then this, and so forth. That helped me develop most of the story. I also decided to title each chapter after songs. In Time Will Tell, most of the song titles relate to a theme in the chapter and were current when the chapter was set. In Round ‘Bout Midnight all the chapters are titles of jazz songs, and most are jazz standards. I’m a music lover, and worked as a DJ in college radio both at the University of Wisconsin-Oshkosh when I was a student, and at North Carolina Central University when I was a faculty member.

Do you ever experience writer’s block?

Do you work with an outline, or just write?

With Time Will Tell and Round ‘Bout Midnight I start with a list of song titles, and then an outline with the major plot points. I don’t always stick to that outline. I allow the characters to guide me. When I write, I visualize the scenes in my head and then write down what I see.

Is there any author or book that influenced you in any way either growing up or as an adult?

One book that had a huge influence on me is You Can Heal Your Life by Louise Hay. I changed my perspective on many things after reading it.

Can you tell us about your challenges in getting your first book published?

I really jumped out of the frying pan and into the fire when I first published Time Will Tell in 1999. It did give me an opportunity to learn the publishing industry and build relationships with readers, booksellers, and book clubs. I printed 2,000 copies of the book, and then I had to figure out how to get them into stores. It was a learning process, but I’m grateful for that leg of my journey. I am now learning how the industry has changed with the advent of e-books.

If you had to go back and do it all over, is there any aspect of your novel or getting it published that you would change?

I would have paid more attention to the library market. I was focused on single consumers.

How do you market your work? What avenues have you found to work best for your genre?

I market my book at book fairs and to college instructors, as well as online.  Time Will Tell has been adopted for a few college courses, and the feedback I’ve received from students has been inspiring. One single mom wrote that the novel inspired her to finish her college degree.

Have you written a book you love that you have not been able to get published?

I was not able to get Madness Galore published when it was shopped years ago. When I have some time, I will review and revise the manuscript, then publish it through my own company, Reyomi Publishing, LLC.

Can you tell us about your upcoming book?

My most recent book, Round ‘Bout Midnight is the sequel to Time Will Tell. When I wrote Time Will Tell I was in my 20s and foolish enough to end it with a cliffhanger. I expected to write the sequel much sooner, but life got in the way. I’m happy that I wrote the book as a more seasoned adult. This book begins right where Time Will Tell ended.

“It never entered my mind that the world I spent ten years building would come crashing down around me all at once, Hope thought at a time when she should have been basking in the afterglow.”

One of the reviewers had this to say about Round ‘Bout Midnight.

“Round ‘Bout Midnight is a book about finding and maintaining love. It’s a book about healing from within in a way that makes it possible to be better than before.”

Is anything in your book based on real life experiences or purely all imagination?

Almost all of Round ‘Bout Midnight is from my imagination except for two funny incidents. Years ago, I got a personal trainer, and during my first training session he put me on the stationary bike to warm up. Then he punched in 15 minutes and I thought, “Warm up? This is a work out.”  This happens to one of the characters in Round ‘Bout Midnight when she joins a gym.  As for the other real life experience, you’ll have to read to find out. (smile) 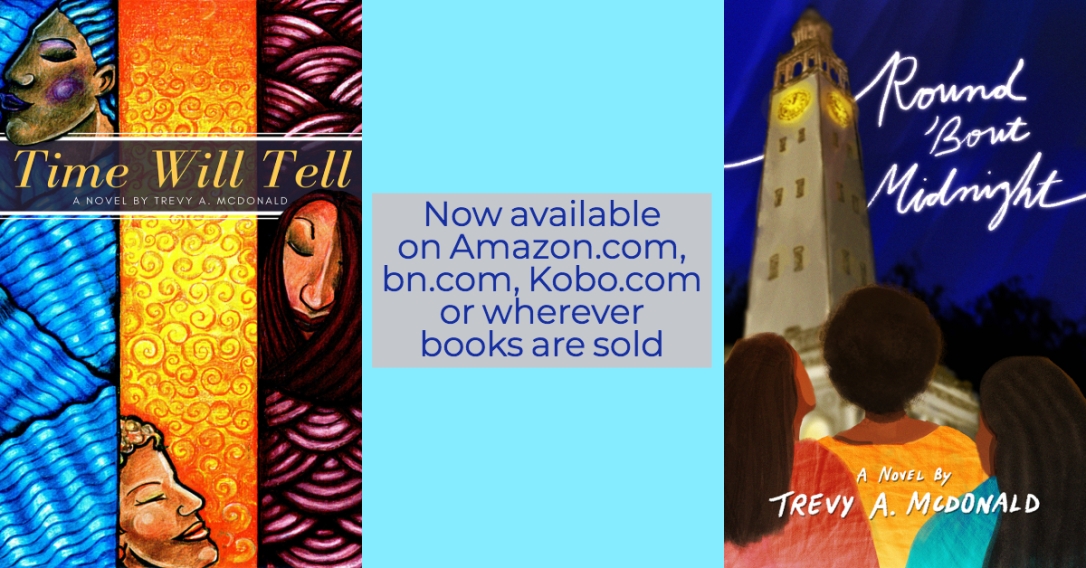 What was your favorite chapter (or part) to write and why?

There is a scene in Chapter 24 at a holiday party. One character, Hope, who is recently divorced attends with her life-long sister friend. They are outside and she is talking about how she learned to embrace and love herself. When they go inside, her ex is there with a date. Her friend who is hosting the party tried to warn her, but she was stopped by a guest she needed to greet. The friend who was outside with her is fuming because she remembers the bombshell the ex-husband dropped on at the ten-year reunion. The ex-husband drops his glass of champagne when Hope walks into the room.  His date has no idea what is going on. Writing that type of tension, hearing each character’s internal thoughts, and resolving it was challenging, but fun.

How did you come up with the title?

I’m a music lover, and of jazz trumpet. Early in his career, Wynton Marsalis recorded an album titled The All-American Hero. Two songs on that album are Time Will Tell and Round ‘Bout Midnight. I chose Round ‘Bout Midnight for the title of this book because my characters are dealing with dilemmas that cause them to have sleepless nights.

What project are you working on now?

I am shifting gears to write a series of chapter books for middle grade readers about the Civil Rights Movement.

Will you have a new book coming out soon?

My goal is to release the next title, Summer Interrupted in 2019.